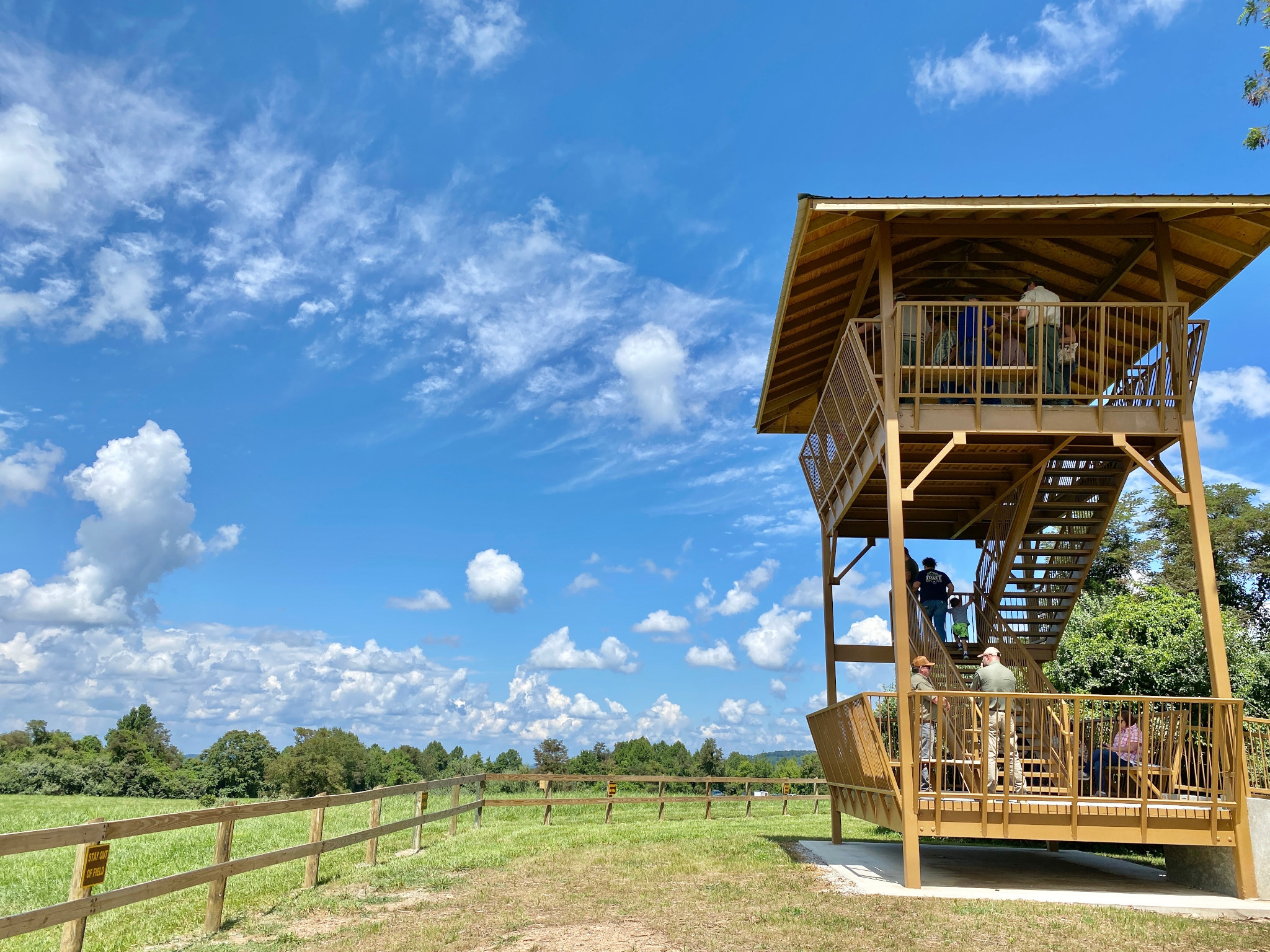 Yesterday was the grand re-opening of the newly constructed Hatfield Knob Elk Viewing Tower in Campbell County. This is the latest project completed with the help of Clinch-Powell's Cumberland Forest Community Fund grant in partnership with The Nature Conservancy and NatureVest.

The tower was originally built in 2005 through a partnership with Campbell Outdoor Recreation Association (CORA), Tennessee Wildlife Resources Agency (TWRA), Tennessee Wildlife Federation (TWF), and Rocky Mountain Elk Foundation, after elk were reintroduced into the area. After 15 years and more than 15,000 annual visits, it was decided in 2020 that a new steel structure was necessary to sustain this resource. Terry Lewis, president of CORA and long-time member of various conservation and wildlife groups, and his wife Jane, had been involved since the beginning, and were instrumental in building and maintaining the original wooden structure. The Lewises facilitated the design plans for the new steel construction tower and worked with the various partners to get this project underway. Though TWRA had committed to funding the project, increased supply costs due to COVID-19 impacted the project budget and timeline. Campbell County Chamber of Commerce partnered with CORA to apply for the Cumberland Forest Community Fund from Clinch-Powell, and $25,000 was awarded in August 2021 to support construction of the tower. Demolition and construction began in February 2022, and a live elk camera was installed for viewing during the closure to the public.

This project exemplifies the triple focus of the CFCF grant - economy, community, and environment. The site is one of the top 100 destinations in Tennessee, bringing valuable tourism dollars to Campbell and surrounding counties, but the new tower also provides ADA accessibility to the first platform of the tower, opening up viewing opportunities for more individuals. Located in the North Cumberland WMA, the site is built on reclaimed surface mining lands, and these continued improvements are enhancing natural resources and furthering environmental stewardship.

The grand opening and ribbon cutting was held at the tower site on August 17, 2022. TWRA Director, Jason Maxedon spoke at the event, saying "The tower and the live elk camera will establish the North Cumberland Wildlife Management Area as the premier elk viewing area east of the Mississippi River." Other speakers included Angie Box, chair of the Tennessee Fish and Wildlife Commission; E.L. Morton, Campbell County Mayor; Bill Stanley, CORA Board Chair; Mike Butler, TWF CEO; and Kendall McCarter, TWF CDO. In a surprise announcement to conclude the event, the new tower was dedicated as "Terry and Jane Lewis Elk Viewing Tower" in appreciation of the Lewises' commitment to conservation and wildlife in Tennessee. While no elk were in attendance at the event, you can catch them in the open fields surrounding the tower regularly in the morning and early evening or on the live Elk Cam at https://twrf.net/elk-cam/.