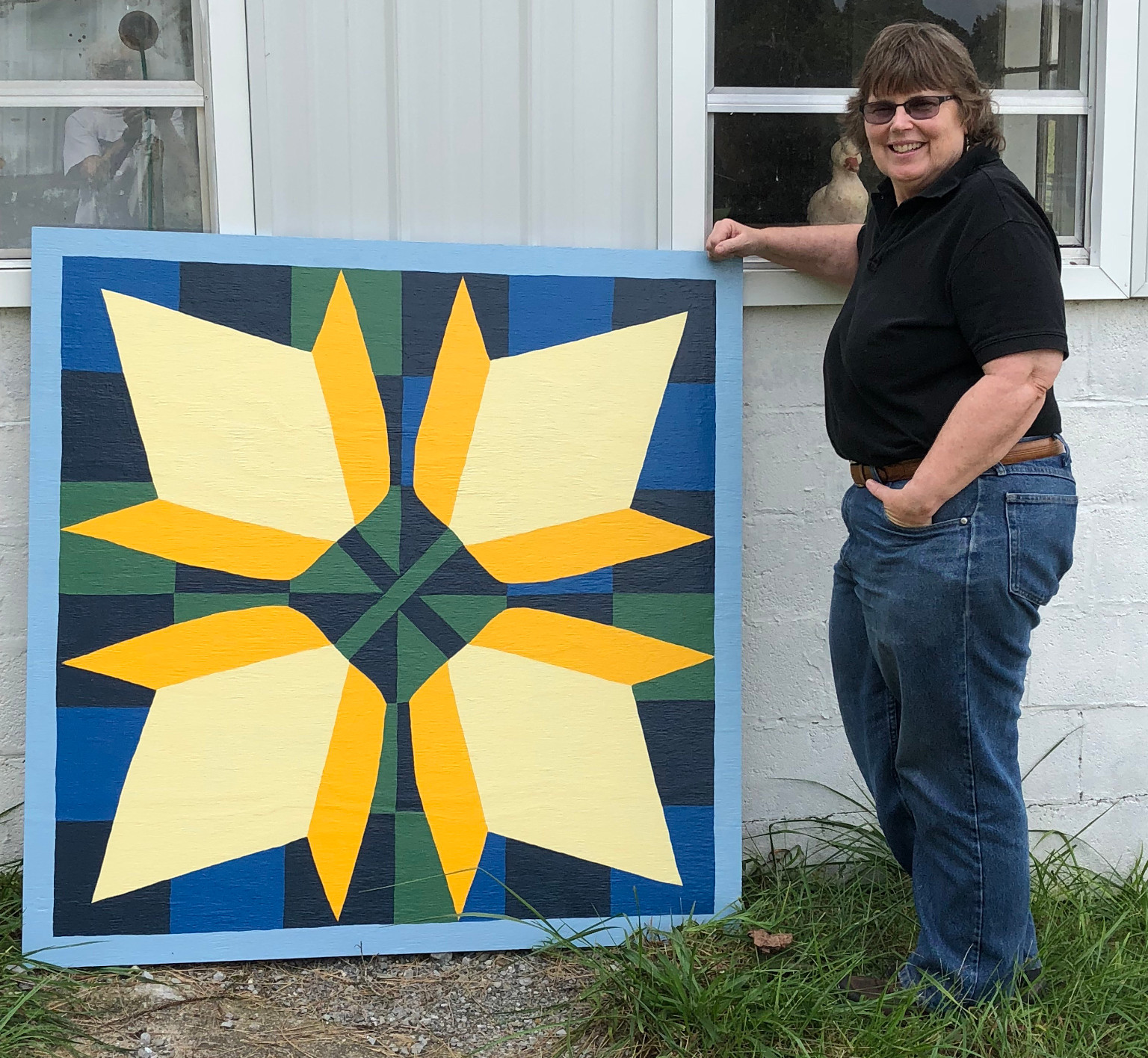 Candy Barbee began her long relationship with Clinch-Powell in 2001 when she was hired as an assistant working with the Enterprise Community, a 10 year federal designation that allowed Clinch-Powell to pour millions of new investment dollars into the region focusing on economic development, infrastructure, housing, basic needs and tourism, but one of her most notable and lasting projects with us the Appalachian Quilt Trail (AQT).

Candy remembers how she first came across the idea. “I visited my sister in Ohio and read an Electric Co-op magazine that featured a program called the ‘Clothesline of Quilts’ located in Adams County in Southern Ohio. It was a fascinating program that Donna Sue Groves, an employee of the Ohio Arts Council, had implemented. Eight by eight feet quilt designs were painted on plywood and hung on barns and buildings or painted directly on them as a public art display. I loved the idea and brought it home to Lindy.” Clinch-Powell Director Lindy Turner loved the community aspect of the project and it’s homage to the timeless Appalachian tradition of quilt making. She also believed the program could be developed into something that would bring tourism to the communities that we serve.

Candy visited Donna Sue Groves in Ohio to discuss the project and look at the quilt paintings. Mrs. Groves was thrilled to see the project expand to another state and was happy to provide guidance. Clinch-Powell wrote grants to the Forest Service, TN Arts Commission, and the East TN Foundation to fund the project. Clinch-Powell partnered with local artists, including Candy herself, youth groups, churches, and art teachers in the area to create stunning quilt blocks. But this was more than just an artistic endeavor. Candy also served with the Tennessee Agritourism and East Tennessee Tourism groups at this time and partnered in that capacity to use the AQT as a means of “ringing cash registers” at roadside produce stands, pumpkin patches, corn mazes and antique shops along the trail.

The AQT now has a digital map that guides participants along a beautiful trek across 3 states, leading them to various stops and driving tourism dollars to small communities. The trail crosses 39 counties in Eastern and Middle Tennessee as well as 11 counties in Alabama, Kentucky and Virginia.

Candy’s idea to expand a small art project from Ohio and develop it into a robust agritourism effort makes her not only one of many important contributors to the success of Clinch-Powell over the last 30 years, but also a huge economic contributor to our local communities. Candy left Clinch-Powell to pursue other interests when the Enterprise Community concluded, but returned as an Appalachia CARES AmeriCorps member nearly a decade later to serve two terms to help expand our home repair programs. The Appalachian Quilt Trail is still drawing travelers off the highways and into small communities today. For more information visit www.vacationaqt.com.